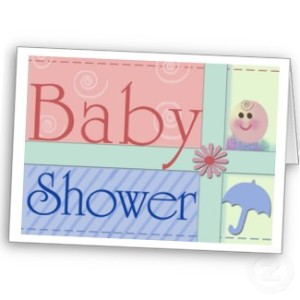 I either have the most thoughtful, sweetest, wonderfulest husband in the whole world.  Or I have a sneaky, no-good, cheap husband who does sweet things to get out of having to buy me chocolates for Valentine’s Day.  The jury is still out, but I’m leaning towards the first.

When he asked me about it a few weeks ago, I told him I wasn’t sure.  I didn’t think it was “appropriate” for the father to throw a baby shower.  But then he explained that it was really more of a “Yay!  Katie’s Pregnant” party at our house.  No gifts.  No games.  No girly things.  It was just a celebration of…ME!  Well, whose gonna say no to that?

I have to show you what he wrote in e-vite.  It will make you want to send Chris flowers for Valentine’s Day, I’m sure:

You are cordially invited to Katie’s Baby Shower, with a twist.  You see I’m not one for traditional baby showers, i.e. the smelly diaper games, guess the baby food, cute clothes, and all of that other crap.  Trust me it only takes one baby bottle chugging contest to ruin baby showers forever for me.  So a traditional shower is out of the question.  However, I am really excited about having a baby and I would love to host a “shower” for my mom-to-be.  Kate has already gone through so much for this little guy and would love to toast the occasion and let her know how great she is for taking care of the little Bean in her belly.  She is doing so good already and will be a great mom come June, for this she deserves a celebration!
So put on your big boy pants and your big girl dresses, get all dolled up and come over to enjoy a great evening with friends.

He went on in the e-vite to explain that because money was tight for everyone, people should bring their own drinks in lieu of a gift, and that he would explain to the baby when he was born that people brought him the best shower gift possible – his first beer.

Is that not the most sweetest, adorable thing in the whole wide world?  If I wasn’t already, I’d marry him all over again.  And not just cause he knocked me up.  Although I’m sure that would be a factor in the decision…

(NOTE TO CHRIS:  I still want the whole shabang for Valentine’s Day.)

(NOTE TO CHRIS:  “Shabangs,” by definition, still include jewlery.)

14 responses to “The Masculine Shower”